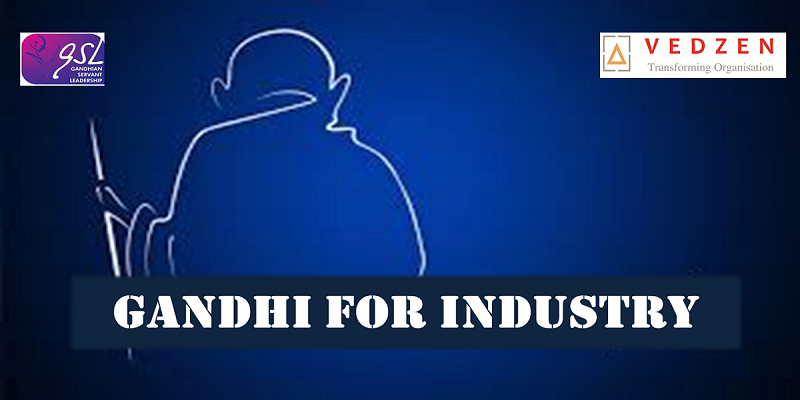 Webinar on Gandhi For Industry

Mohandas Karamchand Gandhi is widely recognized as one of the twentieth century’s greatest political and spiritual leaders.

Gandhiji was a master motivator of people. Through his writings, speeches and deeds he showed the way people of India can attain mastery in life. His motto was simple, “Hands that help are holier than lips that advise.’  He advocated the dignity of labour and led by example. He worked with his own hands; weaved, cleaned, and performed other forms of daily work. Along with practising values like Satya and Ahinsa, he generated revolutionary ideas like Non-Cooperation movement which inspired people to stopped British production, communicate and transport. People joined him constructively in Dandi March to become independent and produce salt on their own. Through Swadeshi Movement he inspired people to spin the Charkha and make their own clothes; to work with their own hands. These movements were a result of Gandhiji’s motivation which induced high self-esteem in the citizen of Indi to become self-dependent. He also played an instrumental role in the upliftment of women across the country. He led the people of India and united them as a nation to fulfil the goal of achieving independence.

Gandhi Ji's principles are a form of practice which have the ability to guide both individuals and organizations. In this turbulent economic age, the business must gear up to the challenge and adopt new methods by creating leaders for change.

Gandhian Servant Leadership (GSL) are a set of principles and is a progressive approach designed towards making individuals and organizations achieve excellence. GSL facilitates business benefits fits at a higher level when compared with existing leadership/management practices. GSL benefits are sustainable and realized sooner than expected. We help eliminate barriers to change that prevent people from managing their work and earn the pride of workmanship.

Adopting Gandhi’s leadership principles are a need of the hour to lead our country towards progress. The principles are more relevant and necessary in today’s atmosphere where hatred, disharmony, violence and intolerance are spreading at an alarming rate and moral values are on a decline. The sessions are also attended by a number of foreign social workers, who are associated with Gandhian philosophy and want to spread it across all regions.

Please join us to know Gandhi Ji's contribution to the industry, the timeless principles and practices that have helped organizations to sustain the gains and develop a culture of excellence.

Hey!! Thanks for Connecting with Vedzen. Submit your email to get the download link.