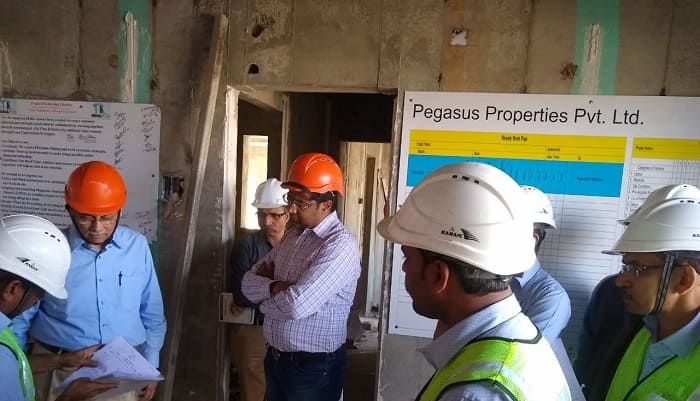 Megapolis is a multi-acre project by Kumar Properties and ABIL in phase III, Hinjewadi, Pune. Our engagement started in 2016. We have successfully created a beautiful system of Work site Excellence through 5 S, Quality SOPM was created and implemented, Contractor Engagement has been improved by Worker Involvement and development, and Visual Lean Planner is in practice to measure, deploy and execute Construction for every building. The way the work is done has improved a lot.

Communication between people is now heading towards a Mobile Analytics, through a web-based reporting. The real change is in making the people believe that the Problems they face can be solved through Team Work i.e. inclusive of the Contractors. Supply Chain Improvements are on the way, better still in the Purchasing Policy.

Earlier, the causes were not studied; it was only the opinion and individual paradigms that ruled the roost.

But now, the communication between people is data based, visual planner based and is directed towards Problem Solving.

In the building completed recently, Rework Reduction was more than 60%, with a simultaneous improvement in work done First Time Right. On the Work site Excellence front, 5S Audit Score is consistently above 60% in all areas at site. Lean Planner brought the Execution Assurance to the level of 75% PPC. Site Stores has become an icon of improvements in the method of storage and stocking, audit score has been more than 65% ever since we implemented 5S. Quality SOPM created and implemented for 15 Work Trade Areas viz. Masonry, Form work, Waterproofing etc.

With the help of SOPMs, we could impact the frequencies of method improvements onsite. As a result, Kaizen in everyday work has improved to give a score 10 Kaizens per month from 1 or 2 Kaizens per month before we got associated.

The intelligence of the Project Managers was put to great use by developing systems based on their past experience.

Line Out and Markings to facilitate correct Wire Binding, Getting the multiple parties notified on the same time, Better coordination between Departments and getting everyone to think about simpler method of execution is what we could achieve in 5-6 months of engagement.

The able leadership of Mr. Narayan Hanmantgad who is the Senior GM there, had brought the difference as he is an enthusiastic Gandhian Leader. His Gemba-based Problem Solving focus has streamlined the efforts of all the people on site, ensuring total employee involvement.

It was a challenge well accomplished by our team, but not without the able support of Hitesh Jain (Director) of Kumar Properties. His enriched Vision drove the whole exercise. His inspiration was the maturity that the organization gained after getting into a continuous improvement mode of construction,and not letting the status quo create a pond of inefficiencies.

The current RERA Bill is going to impact the overall Industry. Speed of Execution and PPC Compliance are going to play the pivotal role in all areas of Project Management. Adherence to timeline has to be 95%, if we wish to stay away from the fangs of penalty mentioned in RERA. Based on our research and Construction Site Audits, we had hit upon some desired efficiencies through our interviews with people on site. Daily Work Clarity was such an issue, however, we can implement Lean Planner that brings a lot of clarity in who is going to perform what on a daily basis and gets monitored. There are already many good Planning systems in place, however, the missing links were found as the Contractor Commitment and Assurance of Plan Compliance, what we call Part Percent Complete Compliance.